Steves: "Ultimately, we no longer need to give treatment to prevent disease"

Steves GbR is a family dairy farmer in the town of Willich near Dusseldorf.  They farm around 320 milking, with each cow producing an average of 12,800 kg of milk.  Bernd the farmer explains they realises the foundation for healthy and productive lactation is always laid in the transition period.

The reason is simple: their pre and post calving was not going well as they wanted, meaning some of their cows struggled into lactation and couldn’t catch up during the milking period.  Bernd knew they administered a lot of treatments and spent a lot of man hours in trying and prevent disease, in effect, they felt they bought or earned security. Surprisingly, few farmers count their time in preventing or managing disease on farm. Also, due to the existing old buildings, they feed their dry cows in one group, which means they feed the same ration to all cows from drying off to calving, making it harder to manage accurately.

Bernd met Julian Sander of Phibro Animal Health through a recommendation for our vet.  After a couple of visits and on farm consultation, they decided to implement the concept of full acidification.

The dry cows are housed in a single-row area next to the lactating cows and fed at an outside feeding bunk. For calving, their cows are kept in a straw barn in the old building next to the house. However, this area is not very large and represents the bottleneck on their farm. Therefore, with lack of space, a two phase feeding system of far off and close ups before calving is not feasible, it would exceed the capacity of the straw area before calving. Which is why they only feed one ration throughout the dry period.

Through Julian’s recommendation, the farm used Animate to achieve full acidification down to a urinary pH of 5.5-6, which worked well. After further product development by Phibro, the farm is now using the new AniStart anionic salts product. With AniStart being highly concentrated, we can significantly lower the DCAD in the ration during the dry period. Enabling us to gain better calcium mobilization and a stable metabolism after calving.

Historically, to achieve full acidification by using anionic salts would often adversely affect the cows dry matter intakes, but with AniStart being really palatable, we have not observed any reduced DMI. Bernd also realises cows close to calving seem to be stressed easier, for this reason  he tries to ensure they bring the cows in small calving groups from the single-row area to the group on straw.

Bernd explains that the right concept for milk fever and animal health disease prevention was developed together with his veterinarian, Phibro Animal Health and his feed consultant. Through using AniStart and lowering the DCAD in the ration, we were amazingly able to bring our clinical milk fever cases from 15% to below 3%.

Intervention during birth is now rare. Also, post calving, they are now seeing lower health challenges and positive production results. Once calved, the animals are moved into a straw area next to the robot, where the farmer ensures they can eat and drink regularly. This is very important, through ensuring their cows eat correctly, helps minimises diseases like ketosis, it also helps ensure all other metabolic challenges are minimized. After recuperation in this area, the cows move back into the herd – heifers in one heifer group and multi-calf cows in one of the other groups.

Like most farms, one of the biggest challenges is economics. Although Bernd advises since putting his dry cows onto the acidification concept, his costs have reduced, an example of this is the dramatic reduction in using propylene glycol “starter feeds”, less health challenges pre and post calving.

“Ultimately, we no longer need to give treatment to prevent disease”, plus the animals start lactation healthier, happier and their performance seems to be better too.

“We are very satisfied with the concept and the excellent advice from the Phibro team”.

“We now always aim for full acidification, therefore, it is important that the urine pH value is constantly between 5.5 and 6 pH”
Bernd Steves
Dairy farmer

AniStart is a very palatable anionic salt product, that is added to a bulk rations with plenty of straw. This concept, ensures you monitor and measure the inputs from feeds including the straw, measuring and monitoring of feeds allows you to monitor your cows for early signs of metabolic diseases like milk fever or ketosis.

Precision ensures success, to ensure the correct amount of calcium, minerals and vitamins are fed to his dry cows, Bernd’s feed company manufacture his dry cow premix, which also included include AniStart at the correct feeding rates. The premix is then added to his straw, brewers’ grains and corn maize to ensure the optimal dry cow diet.

“We strive to ensure the same ration is fed all year round, helping us gain feed consistency for the dry cows”.

“We now always aim for full acidification, therefore, it is important that the urine pH value is constantly between 5.5 and 6 pH”

In summary, Bernd agrees, Animate and AniStart have proven to be very effective for them over the past two years. He advises “If the system is set up correctly during the preparation and dry cow period, the animals will seamlessly run through the dry period and calving and the start of lactation without any problems”.

Request product information to discover to benefits for your farm.
Request more information

Request product information to discover to benefits for your farm.
Request more information
Back to customer stories
SHARE 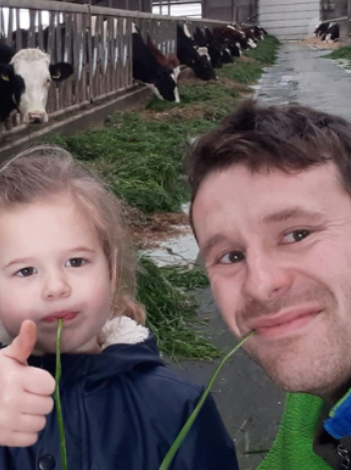 Give it a year and you will see that enjoyable milking with fewer problems quickly yields significantly more milk and balance!