Using OmniGen, puts the dot on the 'i'

A production of 41 litres of milk per day, an animal daily dose of well below 0.5 and a predicted
calving interval of 390 days. The results of the 120 cows of dairy farmer Erwin Bolks from Ommen
appeal to the imagination. One of the success factors is feeding OmniGen to all of their cows. ‘This gives them more resilience and they are more resistant to stress. They achieve a BSK of 60 with greater ease.”

Many livestock farmers strive for the highest possible production per cow. But to keep the cows
healthy and fertile in addition to those many liters of milk per day is quite an art. This was also the
experience of Erwin Bolks, who got the BSK above 50 in the pursuit of higher production. "But I
wasn't very happy with the fertility. I also saw that it was difficult for the cows to maintain the high
production, that was also visible in the data from the farm supervision of veterinarian Ton Pijs of De
Oosthof Dierenartsen. They ran out after four months. Everything could have been a little better,"
he describes the search that brought him to OmniGen at the beginning of 2020. “With OmniGen I
have now put the dots on the i.”

“After four months they were gone. Everything could have been better. With OmniGen I have now put the dots on the 'i'."
Erwin Bolks
Dairy Farmer

Tim den Toom of RumiVar, in collaboration with Henri Kolkman of compound feed cooperative CAV
Den Ham, calculated an optimal mineral mixture in the ration of the Bolks' cows, with the addition of
55 grams of OmniGen per day. 'The cows produce more than 40 liters of milk a day and they now do
that with ease', Erwin experiences. The number of white foulers fell to almost zero and the cows
clean up faster after calving. This makes them heat faster and better, the dairy farmer noticed. 'I
inseminate them earlier and they also get pregnant earlier.' The udder and claw health also
improved. 'How do I notice that the cows do it more easily?' Erwin asks the question himself. 'During the heat period it was 36 degrees and the BSK was at 58. Even after that they remained at
production, healthy and fertile.' The result is also less failure. “Now we have to find out which cows
need to be removed.”

The BSK of dairy farms was of course already discussed at the Secondary Agricultural School. Erwin still remembers it. “It was already quite something if you had a BSK of 30-32.” In his career as a dairy farmer, the BSK of 40 and 50 came into the picture. "We are now at a BSK of 60 and our cows give almost 12,000 liters of milk on average when milked three times a day," the dairy farmer says. "I could never have imagined that." Can it go any higher? 'In 20 years we will be at a BSK of 80', says Erwin with a laugh, but then again seriously. ‘We know better and better how we can best feed and care for the cows. We are constantly learning. We can now feed and care for a cow with 80 to 90 liters of milk per day in a healthy and fertile way. “They are at the top of their game. But, in their
slippers.”

OmniGen is one of the success factors in achieving high milk production. Erwin also made
adjustments to the dry period. The box width was increased to 1.20 metres, deep spreading boxes
with horse manure were introduced and OmniGen is also being rationed here. "A good dry period is
crucial for a good start of lactation."

With his self-propelled feed truck, the dairy farmer feeds a - 'not so complicated' - ration of maize -
22 kilos per cow per day - silage and beer grains twice a day, supplemented with 2 kilos of protein
nuts in the basic ration. In the concentrate boxes, the cows then receive a maximum of 10 kilos of
concentrate. "When you have everything well organized in principle, i.e. good quality roughage and
a healthy herd, you can safely scale up the concentrate dose," is Erwin's experience. ‘Then the cows
convert this extra feed into more production and the cost price per liter of milk falls again. That way
you will have more income.
Bolks farmis very well managed, but, Erwin feels with OmniGen in the ration, they have put the dots
on the 'i' . The cows are healthier and give more milk more easily 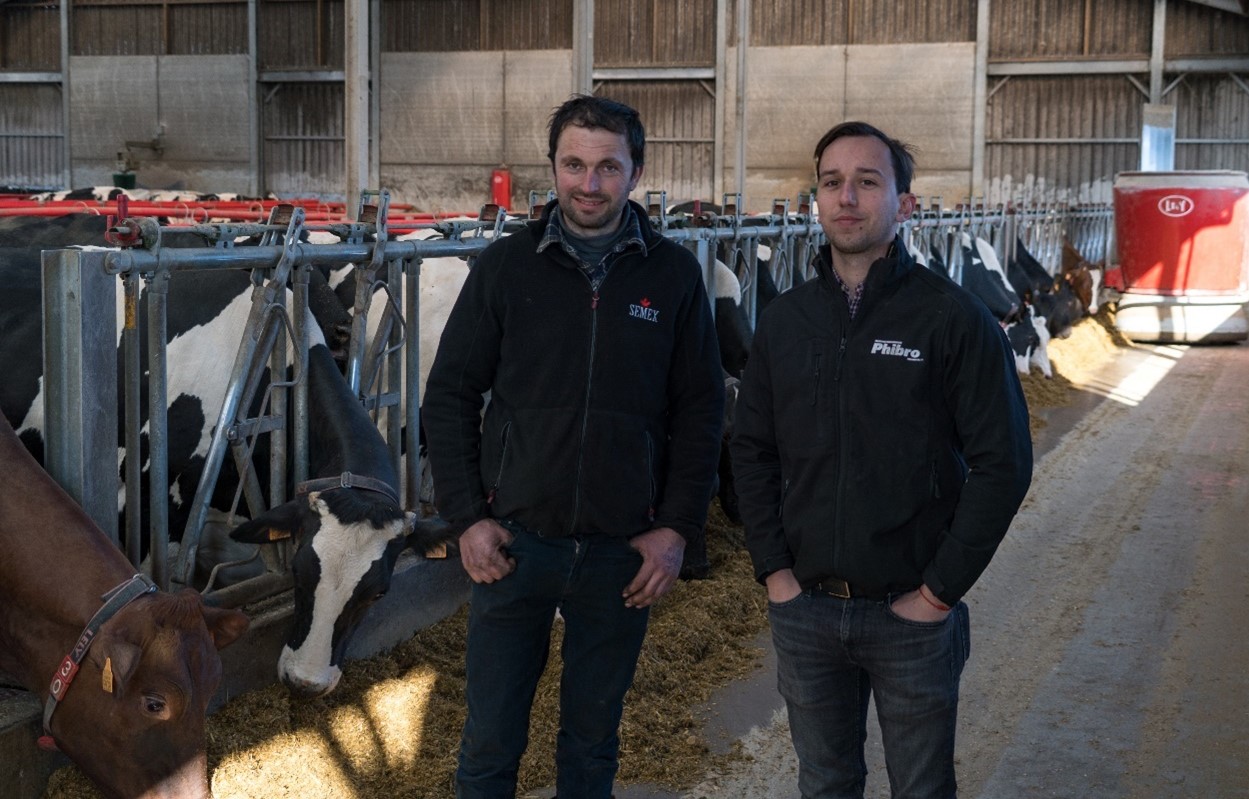 "My wife calls me a perfectionist... I see it differently: I just want as little misery as possible!"

Last summer, my cows consumed much more regularly with OmniGen